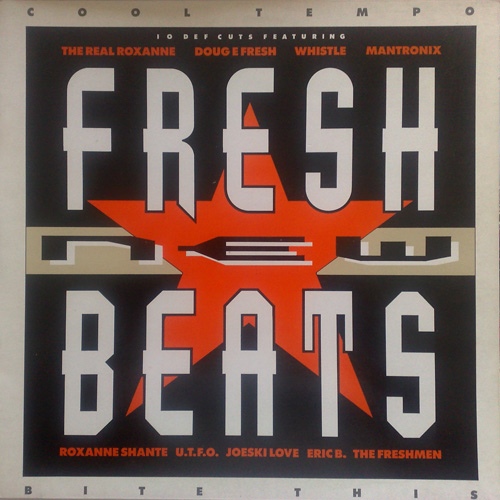 Silvertoad favourite, Neville Brody is probably the best known British graphic designer of his generation. He came to prominence in the 1980s through his record cover design (some examples are included below (Cooltempo Record’s UTFO – Skeezer Pleezer (1986) and the popular compilation Fresh New Beats (1986)).

He studied graphic design at the London College of Printing and would later go on to grow an enviable body of  work as art director of Fetish where he began experimenting with the beginnings of a new visual language and typographical discipline.

Later he was able to put these ideas into practice and to set new precedents through the innovative styling of The Face magazine (1981-1986). It was his work on magazines that firmly established his reputation as a force to be recognised. In particular, his artistic contribution to The Face completely revolutionised the way in which designers and readers approach the medium.

Though Brody would eventually reject all commercialisation of his graphic style, his unique designs soon became much-imitated models for magazines, advertising and the consumer-oriented graphics of the eighties. Brody also won much public acclaim through his highly innovative ideas on incorporating and combining typefaces into design. Later on he took this a step further and began designing his own typefaces.

While working for Arena (1987-1990) he travelled in a completely new direction, using minimalist, non-decorative typography for a time before returning to his expressive visual style which he now began propagating with the aid of computers.

In 1987 he founded The Studio in London, and his unusual computer-generated designs received a great deal of recognition, especially abroad. His work has been commissioned by such major organisations as Berlin’s Haus der Kulturen der Welt, Greenpeace, Japanese companies Men’s Bigi and Parco, the Dutch Postal Service, the German cable channel Premiere and Austria’s ORF TV channel.

Today, Neville Brody is often referred to as a ‘star typographer’ having designed a number of very well-known typfaces.